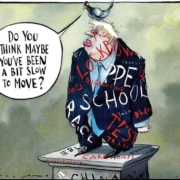 “Hello – Before I start I just want to make sure that it’s definitely you Boris, not Bolsanaro or Trump”.

“Ah it is you! I can hear you banging your spoon on the plastic tray of your high chair trying to get someone to feed your ego”.

“ Now Now Boris! When you calm down I want to ask you some of the questions you’ve dodged in Parliament, at the briefings or to which answers have been fuzzy because they were made from inside a fridge”.

“ Bolsanaro and Trump? I’ll tell you what they have to do with you. You’re like a limited company: Johnson, Trump and Bolsanaro. CEO’s of failing companies responsible for the deaths of thousands but with liability limited through the ability to hide the truth”.

“Yes I know Boris. For God’s sake stop crying. I know that when you trampled over bodies to become PM you didn’t realise you’d get the blame for things you’re responsible for but that happened whilst you were on holiday, in hiding, playing tennis or simply shagging at an away fixture”.

“I know. Of course it’s unfair. Life’s unfair. When you write your memoirs you can leave all the unpleasant/unfair bits out. There won’t be much left, but surely you can invent some good bits. That’s not new to you”.

“Yes, exactly like that. Those water cannon were a great buy. Pity you sold them, you could have used them on gammons who refuse to pick and pack vegetables”.

“No, now you’re being too hard on yourself. Not everything you touch turns to shit; just most of it. If it’s too much to remember, don’t worry, other people have it well documented. After all, one of the nation’s favourite pastimes is writing Boris obituaries”!

“Whilst we’re on the subject of cock-ups Boris, I must raise the question of Brexit. I see the border controls aren’t ready. That’s a simple infrastructure job, of the sort given to a junior officer in the Royal Engineers. I assume you’ve been let down by Tory Remoaners whilst you have personally been doing brilliantly with all the more difficult stuff”.

“You’re What? Going for no deal? Surely you’re not going to drop that ‘ready to go ‘oven ready’ deal’? You know, the one with no checks at the border down the Irish Seal”.

“The Bastards turned the oven off when you weren’t looking? I can’t help you there Doris . It could have been one of many. According to Amazon, sales to government ministers of the ‘Magic Gammon Slicer’ kitchen stiletto are up 200% over the past month”.

“I know you’re meeting Van Leiden next week. I see your logic Boris, but it won’t work. It’s a ‘virtual’ meeting so you can drop the thought of trying to get your leg over. Anyway, does she look as if she goes for badly dressed racist slobs with chipolata sized external brains?”

“No they won’t accept that Boris. They have all the cherry pickers. Don’t you get it, like you, all of our cherries are rotting on the ground”.

“Yes, you are rotting Boris. I know you think that the Brexit catastrophe will pale into insignificance along side the killing of more than half of the Covid 19 victims through your personal negligence, but Brexit will be your lingering leprosy. Bits will be falling off your rotting carcass for years”.

“Sorry, no. I didn’t say ‘rutting carcass’. And yes, that will fall off first!”

“Yes, I’m well aware that you want to go off for a few hours tennis after your afternoon nap, but I have got a couple more things to cover. And you can stop banging that bloody spoon. It was your fault”.

“I know you were on holiday, but you’ll just have to get a mobile like other people”.

“Well it’s your own bloody fault we are losing the roaming rate: you’ll just have to pay the extra like everyone else”.

“Something that everyone wants to know is what Dom has on you that you’re so scared of? He can’t be threatening to expose you as a liar or a racist, or putting a foreign prostitute down to expenses, or even someone who knows how to get someone beaten up: everyone is already in the picture on those issues”.

“Of course I’ve read about Rasputin and you’re right, he did have funny eyes like Cummings, but really! Listen, he can’t do spells and potions. You saw him at his news conference, he can’t even lie without tripping himself up. And whatever you’ve been told he’s not a Shaman”.

“I don’t care who told you he was. Bridgen will tell you anything. What he probably said was: “He’s away man” – As in: ‘he’s pissed off to Durham for an eye test’!

“Finally, just a timely warning that you ignore at your peril. You want to be thought of as a modern Churchill. Well it’s happening. They’re going to board you up and stand you on a street somewhere so that the pigeons can shit on you. See you in a couple of weeks” 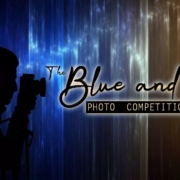 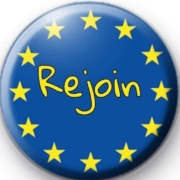 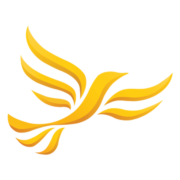 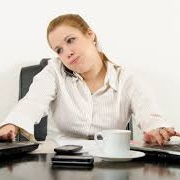 It is up to us 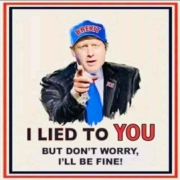