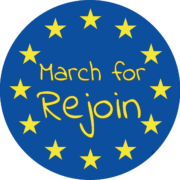 If you have any questions abut the survey please email admin@ukin.eu

Please click here to register for the March For Rejoin

Please click here to go to our Home Page

There have been a few questions recently about objectives and activities and indeed what our strategy is and should be.

We developed a high-level strategy a few months ago that focuses on four key issues. I thought it would be worthwhile to highlight these again, including why it is important to pursue each one and what we have done and are doing towards them.

Firstly though, there are a couple of intertwined issues which keep cropping up which do need addressing.

Some within the pro European movement believe it is too early to campaign for Rejoin as Brexit supporters need to see the damage Brexit does.

I disagree as this is essentially a rehash of what leavers called project fear.

Even in the midst of Brexit induced labour shortages affecting everything from bus timetables, the NHS and food supplies, we are seeing Leavers denying the obvious and blaming everyone and everything other than Brexit for the adverse consequences of their actions. They are simply not going to face up to Brexit being responsible – either now or in the future.

This is largely down to the way the original Remain Campaign was run with its focus on the risks of leaving the EU and the subsequent response of the leave campaign leadership, which was to say Remainers said that all the doom and gloom would happen the day after the referendum – which it obviously did not. The damage is much more insidious and taking time to become apparent and therefore not readily visible to many and is often hidden behind the effects of the pandemic.

Furthermore, as we have also now seen, even when Leavers are backed into a corner and have to admit that there are problems with Brexit, they will say it is all worth it – taking back control, independence and everything else that they spout out to try and justify the damage they have done .

The pro European movement needs to recognise that and move on.

In addition to recognising that we also need to recognise what I believe is the biggest achievement of the Pro European movement.

Over the last 5 years together we have built an amazing cross party pro EU movement, the largest in the EU. There are very few examples of such grass roots cross party organisations in our country or indeed the wider world.

We simply must not let what we have built wither and die – doing nothing will cause that to happen, which is in itself a very strong reason for starting our campaign now.

There is also much we can do now in terms of building our organisation and organising ourselves for what lies ahead. Preparing now will also allow us to lay the ground for future battles on our own terms not those of our opposition, thereby giving us the advantage whenever that next referendum comes. We can do much of this without actually overtly campaigning for Rejoin.

As a movement we face two distinct and separate tasks. The first of these is to persuade a reluctant political establishment and electorate that a further referendum is needed.

We cannot just walk up to a future Prime Minister and ask for another referendum without a strong clear argument for one. Simply saying because we want one won’t do the trick and neither will saying because EU membership is good for us.

Both those arguments are easily countered by simply saying we held a referendum, you lost, why should hold another one. Even when there are clear benefits to EU Membership and clear disadvantages of Brexit, it is too easy for our opposition to say that is what the electorate voted for. We need a far stronger argument, particularly as my own research indicates the electorate largely sees Brexit as legitimate.

Fortunately for us the Leave Campaign provided that argument with their unprecedented industrial scale deceit and dishonesty, and their repeated serious breaches of both electoral law and data protection laws.

The research I mention above also indicates that most of the electorate are simply not aware of what the Leave Campaign did. We should make them aware and use these issues to challenge the legitimacy of Brexit.

We have started down this route with our petition calling for a public inquiry into the referendum in 2016. We should push that demand home and insist that the Leave Campaign is scrutinised and shown up for what it was – a deceitful and deceptive campaign deliberately designed to deceive the electorate.

This is something that has simply not been done in a planned systematic way. The remain campaign spent far too much time focussing on the risks of leaving and countering the lies told by the leave campaign.

This campaign also needs to educate people about the role of the EU, its history and how it works. A considerable proportion of the electorate simply do not know about these issues, something which most often manifests itself in terms of the false claims about the EU being run by unelected bureaucrats.

We have started this work with our Blue and Yellow campaign highlighting the benefits of membership and we have started to produce informative videos about the EU. This campaign needs to be developed and sustained.

As much as some of us may not like it, the levers of power in this country are held by political parties and unless we can persuade those political parties to back Rejoin, we are simply never going to prevail even if we start a new single issue party, something which would be fraught with difficulty and would generate substantial controversy within the pro European movement.

Whilst some of our small parties are overtly pro European, the present situation needs a lot or work.

The Liberal Democrats official policy is to support EU membership, however the current leadership is very reluctant to state that.

The Labour Party Membership is, so we are told, mainly Pro European, however the leadership of the labour party has tuned its back on the pro European vote and is chasimg the Red Wall vote.

The Conservative Party has of course been completely taken over by our opponents. However until the 2019 General Election, a majority of Tory MPs were pro European, indeed 19% of Remain voters in 2016 voted Tory in 2019.

This tells us that there is still support within the Tory party for EU membership. We must encourage those pro Europeans to make their voice heard. If that proves impossible then another avenue may be to encourage the establishment of a new right of centre pro European party.

We have also started work in this area with the establishment of social media groups and channels for all the main UK Political parties. We must develop those and encourage pro Europeans to join political parties and become active. We must encourage party members to campaign within each party for EU membership including playing motions onto the agenda of party conferences.

Whilst we have a large pro European community in the UK, that community is deflated after the events of the last 5 years, and has suffered as a result of the pandemic which has understandably dominated political life for the last 18 months.

We need to rejuvenate this community, strengthen it and build it by celebrating our European identity.

We had big plans in this area, but sadly we had to curtail much due to Covid. Despite that we ran our I Am European campaign around the Census in March. We don’t know the outcome in terms of numbers and we won’t for a while, but despite that it was a huge success, we gained press coverage and we brought the movement together with a very practical campaign that everyone could easily participate in whilst staying safe.

We need to revisit this area and as the pandemic comes to an end and hold more events that bring is together.

We have of course started this with our planed March For Rejoin on 7th May 2022 but we do need to organise other events, not just nationally in major cities such as London, but in every town and city in the land. Considerable support for this was shown in a recent poll that we ran.

So to answer those calling for a clear strategy and plan of action, we do have one, so please get involved. Sign up for the March For Rejoin, join one of our political party sub groups and indeed a political party, sign and share petitions and share our activities and pro European social media posts.

For those of you who are keen, please also consider volunteering to help us. Yes, our team has grown. We have around 20 people actively working on our campaign now, but we need more. The more people we have the more we can do – so please get in touch if you want to help out!

Thank you for registering for the first March for Rejoin. We will contact you with more information in due course.

We look forward to seeing you on May 7th in London.

Join us on Saturday 7th May to celebrate Europe Day by taking part in the first ever National March for Rejoin.

Meet at Portland Place at Midday before the family friendly March to our rally in Parliament Square starting at 15.00.

Bookmark this page and check back regularly for updates!