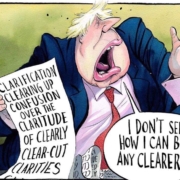 First of all, you don’t need to apologise for ignoring my suggestions on the naming of your latest child. Frankly, I thought that suggesting ‘Ovid’ was pretty safe; I couldn’t in my wildest dreams have envisaged that one of Wilfred’s many earlier siblings would have been named Ovid. Sorry!

This week I was hoping to be able to congratulate you on your progress recovering from your Mustique absence, your couple of weeks at Chevening and your couple of weeks with the NHS and at Chequers, backed up by your having spent this past week in hiding trying to avoid ridicule. Unfortunately I can’t. Frankly, you look like shit.

It was pleasing that you decide to provide the nation with a good laugh. People needed cheering up and being told to ‘Be Alert’ by someone who took five weeks to realise that there was a pandemic in force really did cause great merriment. Oh Boris, you really are a cad!

You won’t appreciate it now, but later when the recrimination phase starts, your frequent responsibility-dodging trips could serve you well. The fact that you have survived this long makes it certain that ‘passing the buck’ is one of your few practical skills. (Sorry, shagging doesn’t count)! Passing the buck might at least validate your choice of dimwits as Cabinet members. Line them up to take the blame. Why should you carry the can when you weren’t there?

It would be remiss of me not to give you this warning. The vast Army of unelected members of your government you are smuggling into #10 won’t have the guts to tell it like it is. The fact is that Keir Starmer has recognised your ineptitude and is moving heaven and earth to ensure that the genuine Bojo is exposed to public view. It could be terminal.

What’s he doing? you are bound to ask. The answer is that he’s being extremely underhanded. He’s reading subject briefs, news reports and official reports, and to your detriment; understanding them. He’s using a really basic recipe of simple truth and intellect. Just to explain, education and intellect are two different things. Given the right circumstance one can educate a Chimp, but one either has intellect or one does not. You have education.

Without your baying sychofants to drown your sequential errors, your dishonesty will not only be recorded in Hansard, but will be audible to all.

‘R’. No not as in “We want ‘R’ cuntry back”, nor as in the common phrase:”Johnson is an Arse”, but as your Scientific clothes peg on which all coats are now being hung. What bad service you’ve had from these Scientists. They thought they were advising on how to beat the virus; you thought they were telling you how to ‘Get Brexit Done’ whilst dodging through your government generated funerals.

Tomorrow when you go into the torture chamber you should modify your answer to the first question. Instead of referring to meetings, you should inform the house that you are spending a little time in pursuits more suited to your ability: “On Thursday I shall be picking Strawberries, on Friday planting Cabbages and for the remainder of the week I shall be fully occupied apologising to relatives of those who have died because of my incompetence.

I suspect that the friendly consensus would be that you should blame your bungling on ill health and retire. Better to be remembered as the twerp with the overactive dick who paid Jennifer £20,000 an hour out of public funds for five horizontal computer lessons, than one of the scarce number in history who led a nation into the wilderness, not out of it.

→ Democracy is a continuous process…by Jon Danzig
Scroll to top